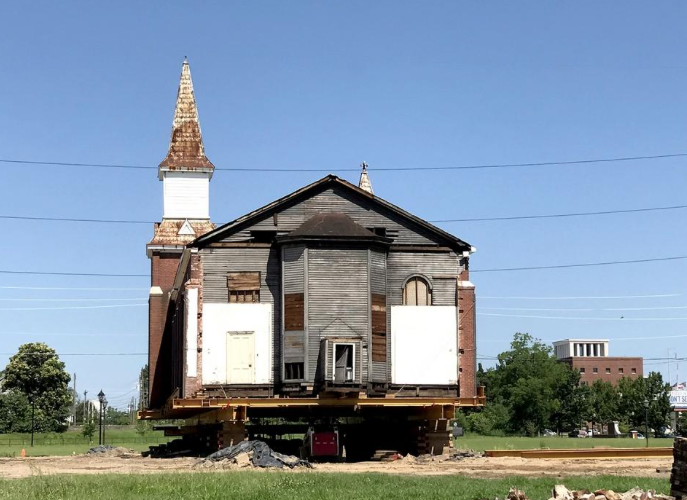 Mother Trinity is jacked up on steel girders and special dollies in preparation for her maiden voyage of about 250 feet.

But the historic black church, considered the birthplace of the Christian Methodist Episcopal denomination, can’t be rolled across Taylor Street to its new foundation until the ground dries out.

“The timeline is constantly changing,” said John Landers, a third-generation building mover from Ellenwood, Ga. “Mud won’t hold the building and it’s been raining the last 10 days or so.”

Landers’ company, Hercules House Movers, was the low bidder to move the 125-year-old church and began preparations in January to secure the brick and wood structure – Landers estimated it currently weighs more than 400 tons – to prepare for the short move.

The church building – and its new site adjacent to the Augusta Canal – is owned by AGL Gas as part of a 1990s settlement to address ground contamination left by a nearby gas plant. The congregation moved to a new church on Glenn Hills Drive in 1998.

After completing environmental remediation all around the church, AGL began a push to demolish the church to remove ground contamination beneath it about four years ago. Last year, AGL’s demolition application was denied by Augusta’s Historic Preservation Commission and the case entered mediation…READ MORE!