Breaking Racial Barriers: Conversations between the African American and Chinese Communities of Augusta 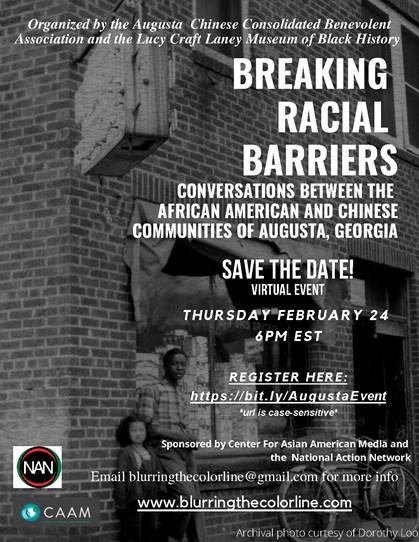 A VIRTUAL EVENT IN COLLABORATION WITH THE LUCY LANEY MUSEUM OF BLACK HISTORY
FEBRUARY 24, 2022

This was an opportunity to hear precious stories that connect the Chinese and Black communities of Augusta, Georgia. Many people are not aware of the historical connection between the African American community and the Chinese families who founded the CCBA in the early 1900s. The majority of these families opened grocery stores in the African American community, many of which were still open in the 1970s. By 1950, there were more than 60 grocery stores; the last one closed in the early 1990s. Little has been written or publicized about this connection between the two communities.

Now, Crystal Kwok has made a documentary that explores her grandmother’s family growing up in Augusta called Blurring the Color Line (to learn more about Crystal’s documentary, go to https://www.blurringthecolorline.com/). This amazing story touches on the dynamics of the Chinese American and African American connection. In her research for the documentary, Crystal opened many discussions between the two communities and believed the public should know of this unique narrative.  Crystal approached the CCBA and the Lucy Craft Laney Museum of Black History to plan a virtual event in which members of both communities could share their memories.