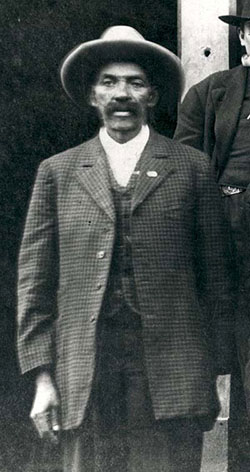 One in four cowboys was Black, despite the stories told in popular books and movies.

In fact, it’s believed that the real “Lone Ranger” was inspired by an African American man named Bass Reeves. Reeves had been born a slave but escaped West during the Civil War where he lived in what was then known as Indian Territory. He eventually became a Deputy U.S. Marshal, was a master of disguise, an expert marksman, had a Native American companion, and rode a silver horse. His story was not unique however.

In the 19th century, the Wild West drew enslaved Blacks with the hope of freedom and wages. When the Civil War ended, freedmen came West with the hope of a better life where the demand for skilled labor was high. These African Americans made up at least a quarter of the legendary cowboys who lived dangerous lives facing weather, rattlesnakes, and outlaws while they slept under the stars driving cattle herds to market.

While there was little formal segregation in frontier towns and a great deal of personal freedom, Black cowboys were often expected to do more of the work and the roughest jobs compared to their white counterparts. Loyalty did develop between the cowboys on a drive, but the Black cowboys were typically responsible for breaking the horses and being the first ones to cross flooded streams during cattle drives. In fact, it is believed that the term “cowboy” originated as a derogatory term used to describe Black “cowhands.”